Mistress Anette is lazily smoking on her cigarette while she watches as her naked slave puts on an ugly mask, just as she ordered. Then she drops all her clothes to make him aroused and when his cock is hard, she starts kicking him in the balls hard with her boots. The slave is suffering pretty hard from it!

The sadist Lady Anette found an other great punishment for her slave. She wants to stroke him ass with a cane, but now she uses two canes instead of one, a thinner and a thicker. She ties him down to the caning bench, preventing him from complaining and she pulls out the two canes to execute the punishment. 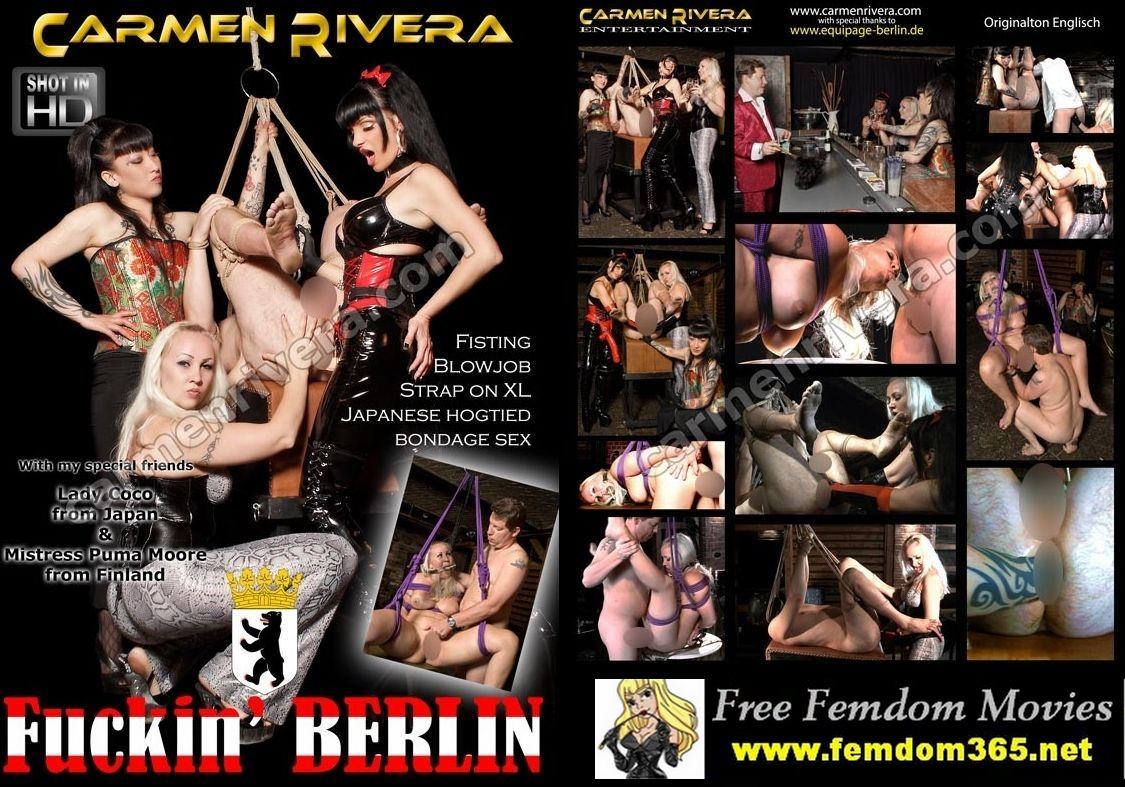 Baronessa Carmen di Rivera and her friends are looking for some fun in one of Berlin´s Bar: An imprisoned slave gets his ass stuffed with the curious hands of the three Ladies. With an XXL-Strap-On they are fucking away what is left of his mind. The anal-cunt of the waiter also seems to be what they are looking for, so that the evening end with a synchronized fuck-orgy. Bound by the hands of Lady Coco with a hanging-bondage, the slave experiences a final climax in addition with a cocktail of his own sperm. Turned on by what is happening, Mistress Puma is having fun with herself. Excessive sexploitation in fucking Berlin. 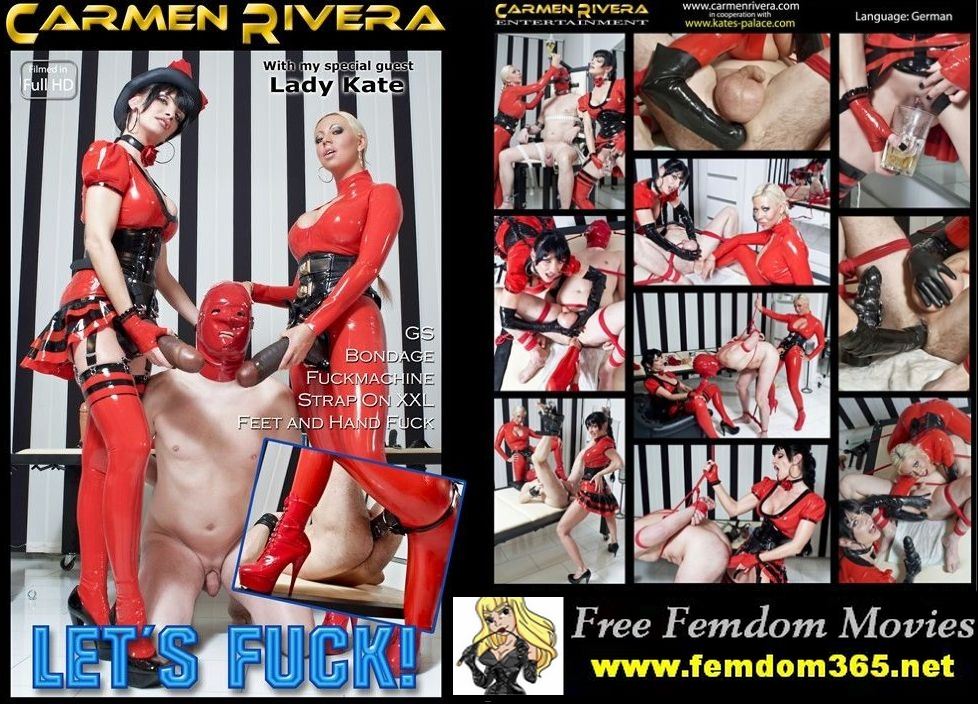 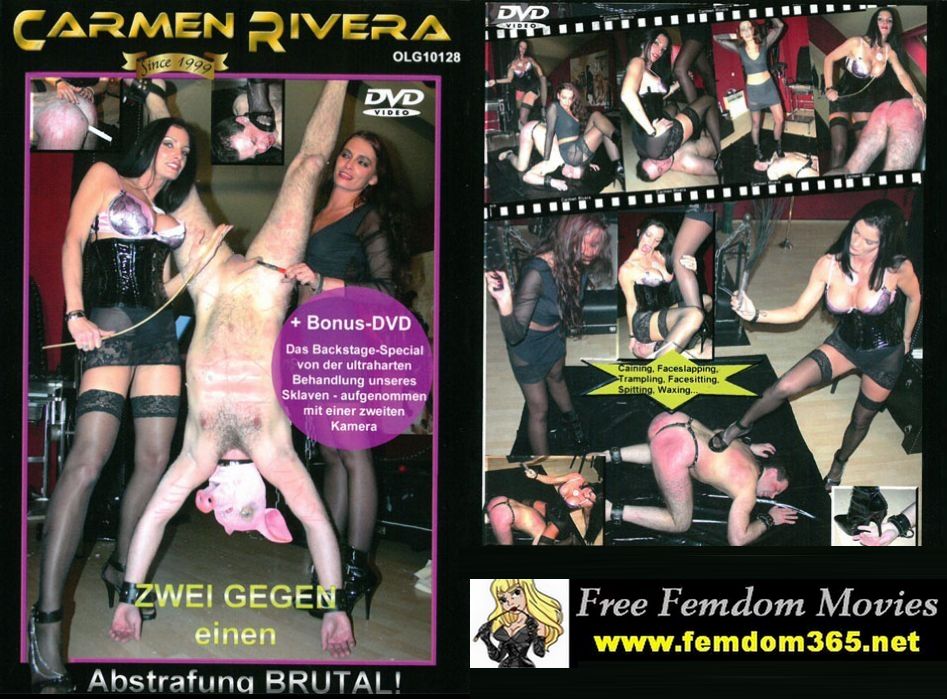 Carmen’s companion, Miss Kelly, preps their slave’s ass for what’s to come. She has his legs tied high in the air so he can’t lower as she works. She shoves plenty of lube in his hole, slowly slipping her entire fist deep inside. When Carmen arrives, the real fun can begin.

My slave gimpy is in for a treat. When Elise Graves and I team up, our devious minds combine to really push him to greater limits than before. He’s about to go through the wringer with this one… Multiple precarious positions. Only rope and a couple of whips and canes. A suspension winch to raise him up higher. And a canvas bag to hood him and throw him off balance. Surely it couldn’t be that bad? Wrong. slave gimpy is pushed to the edge of his ability again and again, each position getting progressively more difficult to sustain than the previous one. And Elise and I giggle with delight the entire time. First, with his hands tied behind his back in a box tie, his neck pulled backwards to constrain his breathing with rope, and his legs in a perpetual strain because his balls are being pulled downwards. He struggles to not cut off his breathing while being pushed around and whipped. Next, we untie his balls and cross his legs to throw off his balance. The rope around his neck tightens and he struggles to maintain his balance without restricting his breathing. Thirdly, we attach his big toe to his testicles.

It’s ballbusting training day for two of Nikki’s unlucky slaves! They’re both bound and not going anywhere until Nikki Whiplash says so – with one hanging upside down from the ceiling by his spread ankles! Both pairs of balls are looking vulnerable, and great targets for Nikki’s sadistic affections. Nikki gives both slaves lots of ball abuse, with kicking, slapping and vice-like crushes in her strong fingers. Just listen to those howls of agony!

Mistress Nikki Whiplash takes great sadistic pleasure in fucking up Nadman’s balls, which are hanging completely helplessly down from above her. Nadman can’t move an inch, suspended upside down in a tight bondage bag, with only his vulnerable genitals exposed, ready for vicious Nikki Whiplash to play with. In spite of his predicament, Nadman is turned on by being in such a position, completely at Nikki’s mercy. And she’s not in a merciful mood!

The Evil Mistress Susi has her new Nylon Bottom fully encased in nylon and suspended on the leather chaise lounge. She looks perfect dressed in shiny latex and pantyhose. Completing her outfit is a huge rubber cock. Her new slave has no choice but to take her cock while bound in the air. Not getting enough, she has him stand and takes him again. There is no knowing how long the Rubber Mistress will use a slave.

Mistress Kiana has decided to twist her slave’s nipples as he doesn’t like that, not only that as the soles of his bare feet are within easy reach he too will be tickled as the Venus milking machine goes to work on his cock. The fun doesn’t stop there for the slave as he has his nipples played with some more and then finger fucked by Mistress Kiana, after all he needs to be prepared to take the red strap-on cock and needs to be well lubricated beforehand.

Mistress Lexi Sindel has her sub locked in a sensory deprivation hood so that her strap on punishments are a surprise. He is in the fuck sling for maximum penetration. She buries her cock deep in his asshole making him take the entire length!